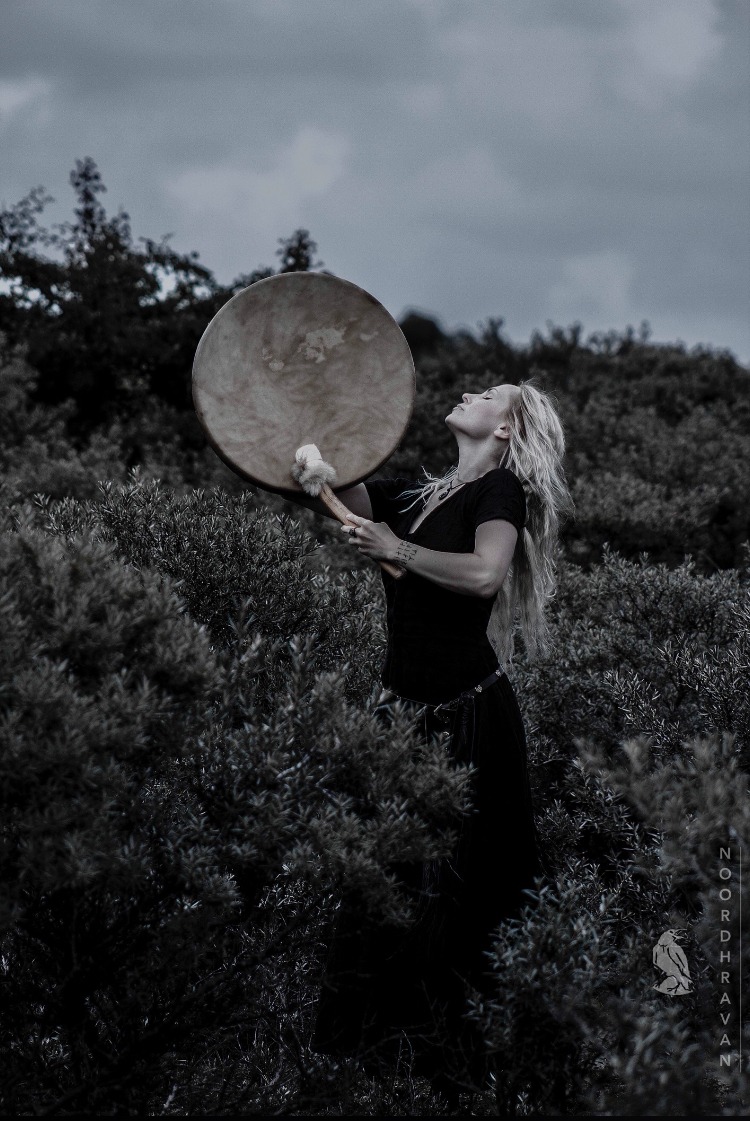 Kati Rán is a self taught Dutch vocalist and historic based multi-instrumentalist singing a Nordic self written repertoire. Performing on a variety of historical folk instruments, such as the Swedish nyckelharpa, moraharpa, hammered dulcimer, Norwegian Kraviklyra, flutes (overtone & bone), Finnish kantele, percussion and skin drums creates a versatile sound tapestry in her unique and intuïtive approach to composing her music.
Kati Rán currently writes on her new music album and records for tv-, film and videogame productions.

Music for the Dutch Viking film REDBAD - May 2018
Kati Rán recorded vocals, nyckelharpa and percussion for the cinema Viking film REDBAD by director Roel Reine, as part of the film score production by Los Angeles based, renowned filmcomposer Trevor Morris.

Musical guest on stages with Gaahls Wyrd and MYRKUR's Folkesange Tour - from 2017 - 2018
Kati Rán performs as one of the folkmusicians for Myrkur's Folkesange Tour, amongst other at Eurosonic Noorderslag and as a special guest at a few festival shows of Gaahls Wyrd.

Opening Reykjavík Fashion Festival 2017, HARPA HALL - February 2017
Kati Rán performs as a singing völva for the customised opening act for MYRKA during the Reykjavík Fashion Festival 2017 at HARPA concert hall in Iceland. Together with producer Bjarki Hallbergsson, Rán created a vocal performance and custom track to open the press exclusive showcase. A völva was considered a very powerful female seer in the Norse mythology. The theme reflected textures and threads of the Icelandic landscape and it's Viking ancestry.

January 2016 Release of two music videos Suurin and Vinda.Suurin was directed by Kati Rán with a professional filmteam of INVITE-AV at hand. The video for Vinda was created in collaboration with the artist Helisir, filmdirector Nick Steinbuch, TwinRune studios NL and post production and audio mastering by producer Christopher Juul.

November 2016. Nyckelharpa recordings were made by Kati Rán for the Danish black metal vocalist MYRKUR for several tracks of the Award Winning Folk album 'Mareridt' at LAVA Studios in Denmark by Christopher Juul.

October 2015. Recording and release of the successful full length, solo album LYS with Christopher Juul on board as her producer, recorder and arranger at LAVA studios in Denmark. LYS features several guest musicians, including members of HEILUNG and members of the former ensemble L.E.A.F.

August 2012 Release of the very first Debut EP 'Leaf' containing five tracks. Produced by Kati Rán and Fieke van den Hurk. The Ep was recorded and mixed by Fieke van den Hurk together with the original band members of L.E.A.F.

November 2011 Release of the co-founded dark-folk project FOLK NOIR, together with Oliver S. Tyr (FAUN). Together they released a five track Debut Ep ' Songs from Home', recorded in Kati's living room and two music videos "Dear Misery" and "The Road". Their music was performed live until end 2014 with Kati Rán on board.

May 2010 Founding and publication of a first Nordic musicproject L.E.A.F together with Fieke van den Hurk and the release of the debut single Nymånen. The mysterious new project made waves in the folk genre by teasing the project online, month ahead of its initual release with a website, press articles, booked concerts and a online released single 'Under Nymånen' of the upcoming EP 'Leaf'.

"The album LYS is a dream come true. Beautiful harmonies merge between the vocals of Kati and her instruments. Personal favorites are the tracks Flamme, Harpa Toner and the title track Lys that have been going on repeat in the living room. " - Lindy Fay Hella | WARDRUNA

Kati Rán has appeared on stage as a opening act and guest musician with the Norwegian group Wardruna on several occasions in the past, including the specially curated concert by Wardruna's "House of the Spinning Seer" at ROADBURN 2015, for which Kati Rán and Einar Selvik gathered additional choir in the Netherlands.
Concert: WARDRUNA 'House of the Spinning Seer' 2015

Kati Rán provided the allround management for Heilung's live debut concert'LIFA' at Castlefest 2017 and MIDGARDSBLOT 2017 in close coordination with music producer Christopher Juul, the band and recruited technical crew. The first performance of HEILUNG was filmed, mixed, mastered and released on November 3rd 2017. Shortly after the enigmatic live production went viral online, with the track KRIGSGALDR counting over 32 million views alone on YouTube. The full visual and musical stageperformance in 4K video can be viewed here: HEILUNG: LIFA full concert

"I first met Kati Rán on the viking burial grounds at Midgardsblot 2015. After we had talked for a bit, she took out her nyckelharpa and played beautifully for me, right there on the ground, and I knew I was in the presence of a real artist. Her album LYS is a stunning mix of traditional European folk music with a new and fresh interpretation. She bring ancient instrumentation and sense of melody to a different place, that both take you back in time but also somewhere new." -Amalie Brun MYRKUR
Kati Rán and Myrkur recorded amongst others an acoustic version of Myrkurs song Himlen Blev Sort in LAVA studios, Denmark - November 2016
Video: Kati Rán on nyckelharpa with Myrkur

-"(3Norns Productions) Kati Rán is a Dutch folk vocalist and multi-instrumentalist, the former leader of L.E.A.F. decided in 2015 to start her own solo career. Her new single Blodbylgje; a song that lasts over a quarter of an hour is a statement. A declaration of intent, a demonstration of independence and stylistic direction infused with Nordic Mythology. At her side we hear the powerful voice of Kristian Espedal Gaahl (Trelldom, Gaahls WYRD, ex Gorgoroth, ex Wardruna) offering all the baritone power of which the Norwegian frontman is capable. An oceanic power that exalts in a superlative way the mystical voice of Kati, engaged with sublime sounds in a folkloristic and theatrical setting. "Blodbylgje" ("waves of blood" ed) is performed in NyNorsk, a meditative, evocative and totally enveloping piece. Based on the Edda, with the enigmatic spiritual guide of Blóðughadda; one of the nine daughters of the sea God Ægir and his wife Rán. The collaboration with the mythical Gaahl brings this piece to infinite levels of mystical suggestion; the studio work of Herbrand Larsen (ex Enslaved) and Christopher Juul is not to be forgotten. If you think Wardruna is something unique and inimitable, then Kati Rán will be the most concrete, sincere, real and overwhelming answer that the music scene can offer." 9/10 Written by Luca Zakk - METALHEAD Italy.

- "It’s pitch black and a single light comes on. A mesmerising tune from a mysterious woman fills the space. The opening act Ran at Reykjavík Fashion Festival was in perfect harmony with the first fashion brand on the runway, Inspired by the Icelandic heritage, raw nature and mysticism, Myrka mirrors the culture in its design by using the depth of the Icelandic country." -NordicStyleMag | RRF 2017

-"Opening act Kati Rán at the RFF 2017 completely owned the show and kickstarted the Rekjavik Fashion Festival with a loud bam! I got the honour to saw these amazing designers and artists conquer the world in one night."  -Inga Sörens, Iceland Photography & Editorial. |  RRF 2017

- "Like a great wind he came to her. The world drew breath and let it out again in a great shout that was all runes, all names, all meaning. The divided self was once more, in a union beyond time or place or person, self-known. Takk Kati Rán." - MYRKA Harpa Einarsdottir | RRF 2017

-" Kati Rán, multi-instrumentalist and possessor of a voice that could becalm Genghis Khan is forced to start her debut live performance before the main area (at Midgardsblot Norway) has opened to public, but the rush toward the stage is an indication of their cache amongst pagan folk fans. Intricate and worldly their journey from primistine tapestries to full blooded swirling rites, sends devotees in to a frenzy. " -TeamRock Metal-Hammer | MIDGARDSBLOT Norway 2016

- " ... and then followed the first band of one of the musical highlights of the weekend (Festival Mediaval 2016); Kati Rán (L.E.A.F) we could already see last year with Folk Noir, this year she brought her own band. The group presents new songs from the brand new Nordic Folk album LYS and they all convince. A very strong performance and presentation follows from the three blonds at the front and their musicians in the back. The only minus was the programming of their set much too early on the day, because those who could not make the early hour have missed a true musical highlight of the weekend." - Griftmusik.de | Festival Mediaval Germany 2016
Biography

"Music can be considered one of the strongest ways to communicate with one another on a intimate and personal level. Music created from deep within can transmit pure feeling and universal emotions. Therefore, music is a reminder that we are part of nature; it may cause the listener to wake up and see the beauty of the dream called Life." - Kati Rán 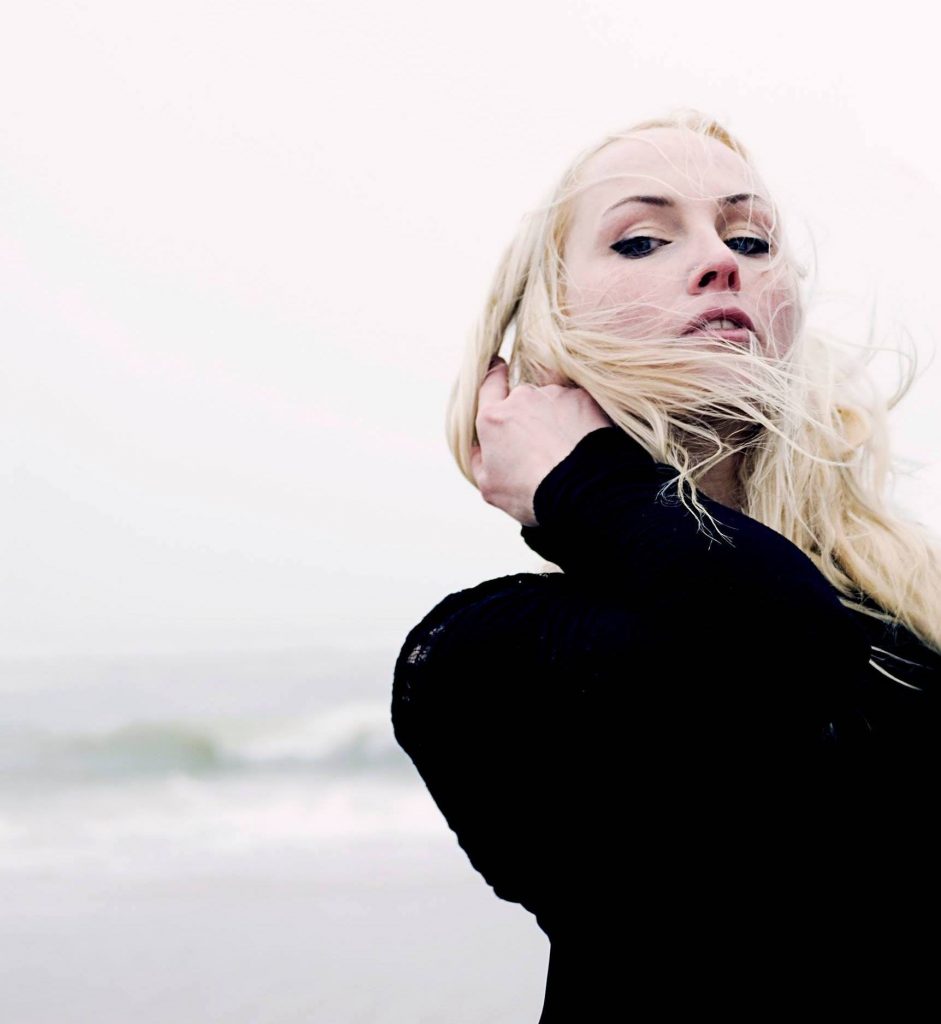 Kati Rán is a Dutch vocalist performing mostly in Nordic languages. In her work she utilizes her song and lyric writing, vocals and a variety of historical folk instruments, such as the Swedish nyckelharpa, moraharpa, hammered dulcimer, Norwegian kraviklyra, flutes (overtone & bone), Finnish kantele, primal percussive textures and skin-drums.

"From the start is has been my intention to make music that carries the power to reconnect people back to nature, to their history and to each other, while sounding fresh and pure as Nature itself." - Kati Rán

'Change is a force of nature. When paganfolk singer and multi-instrumentalist Kati Rán dissolved her band L.E.A.F.to embark on a solo project Kati Rán, it was so that a new, more primal vision could emerge, unbound by conventional song structure and tuned to the vast dynamics where intuition and the elemental meet.
That vision is about to surface with the release of the track, Blodbylgje. Delving deeper into Nordic mythology and the perpetual currents that course through them, it’s an immersive, 15-minute séance, featuring guest vocals from world-renowned Gaahls Wyrd frontman Gaahl, that takes the metaphor-rich environs of the ocean as both its thematic and sonic guide. Restless yet meditative, finding its bearings in glacial yet ceaseless flow and flux, it’s bound to both the rhythms of the ancient Nordic Eddas, and the enigmatic essence of its spiritual guide, Blóðughadda – one of the nine, sea-personifying daughters of Ægir and Rán, said to represent the ‘bloody hair’ red crest of the waves.
Recorded at home and in the studios of Heilung’s Christoper Juul and former Enslaved keyboard player and vocalist Herbrand Larsen, Blodbylgje doesn’t seek to recreate ancient forms, it’s an act of regeneration. Kati’s velveteen, trance-borne reveries, incantations and stern, spoken word narration, merged with the abyssal undertow of Gaahl’s baritone chants, chart a new and expansive set of sonic co-ordinates. Awash in susurrating drones drawn from oceanic overtones, and the creak and distant crash of ropes and waves, Blodbylgje re-imagines the sea as mercurial and enriching, amniotic medium. A fever dream that unloosens the boundaries of consciousness, it retunes itself to both the unfamiliar beyond and earlier, residual states of awareness within.
A herald of a larger work to come, Blodbylgje is the embarking of a journey that has already ranged past all know marker points. It begins here, as a whisper to reawaken the core'.

“There was always a moment, sailing between the shore and island, when neither was in sight.” – Steve Erickson, ‘Tours Of The Black Clock’

Currently Kati Rán writes and records a new album. No further live shows are planned during the writing and recording process.

Please fill in all of the required fields